There’s no doubt that illuminated signage is easier to see than traditional, non-illuminated signs. LED signs can easily garner more attention, increase situational awareness, and display their message better than their non-illuminated counterparts in dark conditions and direct sunlight. However, until recently, installing LED directional signage meant having direct access to a power supply was an absolute necessity. Now, solar-powered LED signs offer the convenience and flexibility of placing them in the best possible location for maximum visibility, along with numerous other benefits. 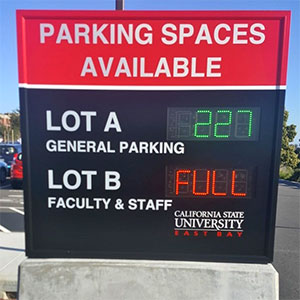 As previously mentioned, solar power offers flexibility that plug-in or hard-wired signs simply can’t. Sometimes, powered signs are needed in places where traditional power sources simply aren’t available. Conventional batteries are a solution to this problem but come with some downsides. First, the overall battery life can be short, and as batteries age, they lose their ability to hold their charge, further decreasing their useful life. This makes ongoing maintenance and the costs associated with it a significant factor. Additionally, traditional batteries require swapping, adding to battery-powered signage maintenance and labor costs. Plus, if the sign needs to be moved, the dismantling and remounting process is much simpler for solar-powered signs than hard-wired ones. 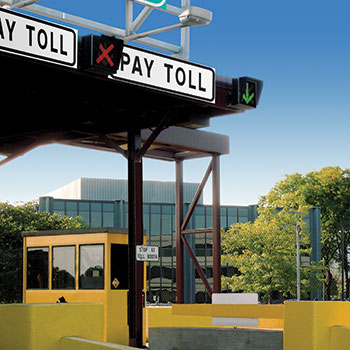 Solar-powered LED signs can provide years of virtually maintenance-free service as they depend less on conventional energy sources, such as municipal plants and the national grid, than hard-wired signs. Being off the traditional power grid and battery-free equates to nearly no required maintenance, as mentioned above, and also means minimal operational cost.

These signs are easily installed on roads, highways, airports, train stations, loading docks, drive-thrus, parking facilities, industrial settings, and any other setting with limited access to municipal power. Simply take the sign to its site, properly mount it, enable solar power and its battery, and let it operate. The solar panels use the sun’s energy to power up the battery and run the LEDs, and the batteries store energy to illuminate the sign at night and in other low-light conditions, such as adverse weather. The solar energy stored in the battery can even keep the sign illuminated for some time in the event of a power outage.

Solar energy comes directly from the sun; it’s free and accessible to everything that exists on the earth’s surface. Further, solar power doesn’t damage the environment in ways that man-made electricity does, it produces zero waste, and is 100 percent renewable. 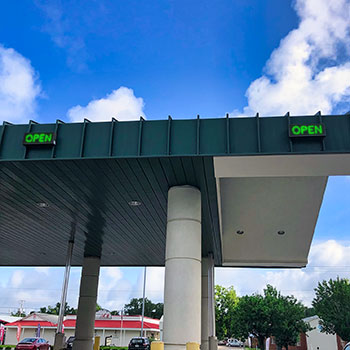 In contrast, the majority of electricity is made by burning fossil fuels which create two primary byproducts: carbon dioxide and pollution. Nuclear power plants use incredible amounts of water in their reactors to turn turbine generators, which produce electricity and cool the steam, turning it back into liquid water. Finally, hydropower plants typically rely on dams to control water, spin turbines, and create electricity. With dams, there’s the problem that damming water will have a significant impact on the local ecosystem.

The only slight downside regarding the environmental friendliness of solar power comes from the battery. GEL batteries (commonly used in solar-power applications because of their slow, deep discharge) have a cycle life of up to 1,000 cycles and usually come with a five-year warranty. However, at the end of the GEL battery’s life, it will need to be taken to an authorized recycling facility and a replacement battery installed.

In a time where “going green” and dropping carbon footprints have never been more important, utilizing solar energy to power LED signs is a practical choice.

Creating electricity through the previously mentioned, traditional methods is expensive. Further, digging the necessary trenches and laying/hanging the required wires to power illuminated signs also comes with a hefty price tag. However, solar-powered LED signs 100-percent eliminate the expense of using electricity from the grid and function on their own (with a bit of help from the sun). Through the combination of bypassing traditional electrical installation procedures and not using power from the grid, tremendous financial savings and a very high return on investment (ROI) can be achieved.

Solar-powered LED signs are an excellent choice for nearly every industry and application. From the highway to drive-thru lanes, from parking facilities to loading docks, and everywhere in between, solar power can provide numerous benefits on top of the existing benefits of LED signs. Did you know all of Signal-Tech’s signs are solar compatible? Contact us anytime to learn more about our entire lineup of LED signs and how you can begin reaping the benefits of powering them with solar energy.