Information Center  >  News & Articles  >  NEMA vs IP Rating
News & ArticlesCome connect with US!
NPA goes virtual with PMX LIVE and we'll be there!How to Calculate Watts or AmpsNEMA vs IP RatingNarrow vs Wide Angle LEDs, What's the difference?How To: Adjust the Flash Rate for TCL, SBL or PHX SignsEmbrace Your MorningsRetooling for Success During the COVID-19 PandemicSignal-Tech raises $3,225 and 420 lbs of food!COVID-19 Statement From Signal-TechSignal-Tech is temporarily closed until further notice.More Articles

Enclosures are used to prevent damage or harm to things like equipment or electronics, and also to reduce the risk of injury. The level of ingress protection is commonly indicated with a NEMA (National Electrical Manufacturers Association) or IP Code (Ingress Protection Code). This specifies what can and cannot get into an enclosure, and what external conditions it can tolerate. 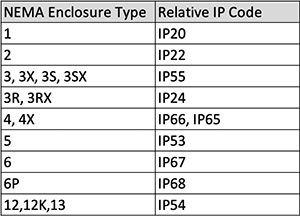 The IP rating system is established by IEC standard 60529. This is typically expressed as "IP" followed by two digits. The leftmost digit indicates the level of protection against solid objects, and the next digit is protection against exposure to water. A letter is sometimes added at the end for special cases, such as resistance to oil or high voltage. Protection against solid objects can be intended only to keep larger things like hands, fingers, or tools out of the enclosure, commonly to protect against shock hazards, and to protect delicate electronics. It can also be more tightly sealed to even keep out dust. Water resistance can include a gentle drip, spray from a hose, or powerful jets in wash-down applications. 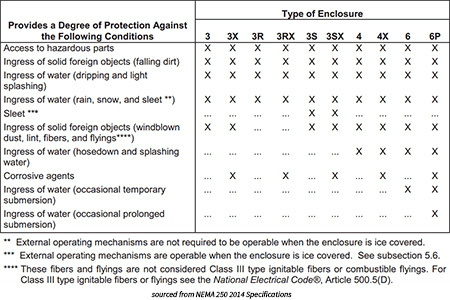 The NEMA rating system uses a number followed by one or two letters. NEMA 1 enclosures are intended to protect only against solid objects, not liquids. NEMA 2 protects against lightly dripping water. Both of these are only meant for indoor applications. NEMA 3 adds resistance to outdoor elements, such as rain and sleet. NEMA 4 adds resistance to hose-directed or splashing water. Within the "3" and "4" ratings, specific letter suffixes can be added to indicate protection against various specific environmental hazards, including wind-blown particles (dust or fibers) and corrosion. Corrosion resistance is tested using an extended salt spray. Additional rating levels are available when liquids like oils may be present, which can degrade plastic and rubber, and for hazardous environments with combustible gas or dust.

For example, NEMA 3S can tolerate rain, snow, and sleet. The "S" means the enclosure protects against wind-blown particles. NEMA 4X can additionally resist hose-directed and splashing water. The "X" means it also is corrosion-resistant.

While the specific tests used to determine an IP Code or NEMA rating differ, there is overlap in what the ratings measure. A table from the NEMA 250 standard provides a quick cross-reference between a specific NEMA rating and the corresponding IP Code that the rating meets or exceeds.